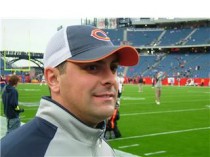 Ryan is the owner of PROFORM Athletic Development, a business he started shortly after relocating back to the seacoast area in 2011. Prior to moving back to his hometown Ryan spent two years as the Director of Sports Performance at OAK Orthopedics in Bourbonnais, IL. Ryan was hired by Dr. Mike Corcoran (Chicago Bears Orthopedic Team Dr.) after working together for the Bears in Chicago. Ryan’s similar philosophies and passion for sports medicine were an excellent fit to Dr. Corcoran’s sports medicine team at OAK Orthopedics. In his two years at OAK Ryan worked with athletes of all ages, abilities and sports with the common goal of injury prevention and overall physical development.

Prior to his work at OAK, Ryan spent four years as a Strength and Conditioning Assistant Coach for the Chicago Bears under Head Coach Lovie Smith and Director of Physical Development Rusty Jones. In his four seasons, the Bears clinched the NFC North Division (2005 & 2006), in 2006 captured the NFC Championship earning a spot in Super Bowl XLI and accumulating an overall record of 42-26. Also during his tenure the Bears saw significant reduction in injuries and games missed due to injury. His responsibilities included coaching athletes on all aspects of an NFL strength and conditioning program, including; injury prevention, return to play training, weight training, conditioning, agility, functional movement, body composition, hydration and nutrition. Also during his time with the Bears he assisted both the offensive (Coordinator & QB’s) and defensive (Scout Team & LB’s) coaches during practices and games.

Prior to working with the Bears, Ryan spent time with the NHL’s Buffalo Sabres and was the Head Strength Coach for the 2002 World Bowl X Champion Berlin Thunder (NFL Europe). Ryan began his career in 2000 as an intern for the Buffalo Bills, where he spent the entire 2001 season and several summers under head coaches Wade Phillips and Greg Williams.

Ryan received his Master’s Degree in Applied Exercise Science and Sports Studies from Springfield College in 2004. He attended Plymouth State University and earned his undergraduate degree in Physical Education and a Minor in Health in 2001.

A native of Dover, NH Ryan is excited to return to the seacoast area to continue his career in strength and conditioning/fitness. Since returning to the area Ryan has been very involved in training/consulting adults, athletes, teams and organizations throughout NH, ME, and MA. Ryan was an Assistant Coach/Strength and Conditioning Consultant for the 2011 & 2015 State Champion St. Thomas High School football team where he coached for 6 years. He was also the strength and conditioning consultant for the University of New Hampshire Lacrosse team as well as several high school teams around the seacoast area. Ryan has also been the guest speaker and presenter at many schools, organization and conferences throughout New England and Illinois.

Over his 20+ years working in the NFL, NHL, NCAA and US Navy as well as with young athletes and the adult population, Ryan has executed strength and conditioning/fitness programs that have been highly successful in the professional ranks as well as with people of all ages, abilities and sports. His passion and philosophy emphasizes science based injury prevention developed through: functional movement assessments, body composition, nutrition and hydration. These injury prevention techniques, paired with effective strength and conditioning/fitness programming, is what today’s active person needs to meet their goals and have long term success.

"Throughout my career as a strength and conditioning coach I have realized that most people do not take a comprehensive approach to their athletic development and fitness. Often time people focus one thing or the other and never really optimize their training. My approach is science based with the goal of long term athletic development and fitness. My goal is to educate you on all aspects of your training to ensure optimal results".